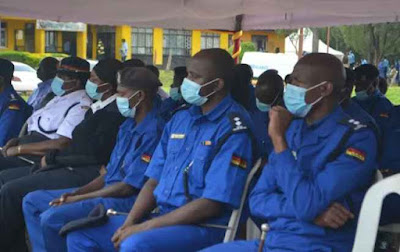 The National Police Service Commission, in collaboration with the Ministry of Health, conducted an exercise to monitor the health status of police officers in Kakamega County.

The exercise, which has continued to identify the number of officers injured while on duty, was launched at Kakamega police station and is expected to be carried out across the west.

Speaking during the exercise, the commissioner of the national police commission, John Ole Mayaki, said police officers would be examined physically and mentally, and those who were injured on the job would be given special insurance.

"The exercise is aimed at police officers who were injured on the job. In Kakamega County 194 officers will be investigated in a three-day exercise, ”said Ole Mayaki.

One of the doctors who will carry out the medical examination, Dr. John Kibosia, said they are investigating the injuries and illnesses that the police officers are suffering from.

Dr Kibosia, however, pointed out that as a result of their previous research, there was an increase in lifestyle-related diseases among police officers.

"We have found that about 80 percent of police officers suffer from certain lifestyle diseases such as high blood pressure, diabetes and stomach ulcers," said the doctor.

For his part, the police commander in the West region Peris Kimani, said some of the diseases cause police officers physical problems and even death.

Kimani called on the commission to relocate wounded police officers to facilities close to their families to ensure they are well cared for by their families.