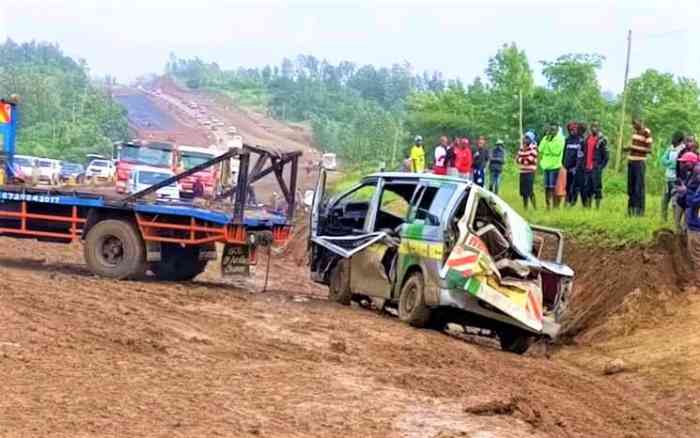 One of the overcomers of a terrible street mishap that killed three understudies of Chogoria Girls High School alongside their driver has related the occasions paving the way to the street bloodletting.

The Saturday morning, December 18 occurrence thus guaranteed four lives, while the remainder of the understudies who were ready brought about basic wounds. Crisis specialist organizations surged them to a close by clinic for medical aid therapy and affirmation.

Relating the trial, the truck driver who slammed into the 14-seater matatu, described how the mishap happened quickly, allowing him little opportunity to rescue the circumstance.

"The matatu was attempting to overwhelm a trailer. There were several vehicles in front of the trailer also.

"I saw the (matatu) driver attempting to sneak from behind the trailer endeavoring to overwhelm, yet at first I didn't streak lights to attempt to stop him," he reviewed.

The truck driver further related how he took a stab at veering off the street trying to dodge the approaching risk yet proved unable.

"At the point when he at last chose to overwhelm, I saw the two understudies on the front seat raise their arms in trouble and realized that I needed to attempt to avoid what was impending," he proceeded.

"There was a trench out and about so there was little I could do. Be that as it may, I selected to steer to one side, out and about's shoulders. Sadly, the matatu driver additionally veered off to that course, and figured out us," the driver, who detected a wrapped temple identified.

At the emergency clinic where different survivors were checked in, distressed guardians blasted the Matatu Sacco and begged the National Transport and Safety Authority (NTSA) to make a move against it.

"I might want to ask the NTSA to make a move against the Matatu Sacco with the goal that we can check such occasions in future."

The matatu had 11 understudies ready, all from Chogoria Girls High School, while the truck was shipping potatoes towards Kirinyaga.