Mudavadi, Wetangula and Kalonzo Refuse to Join Ruto After Boasting About Being on Their Way to the Hustler Nation 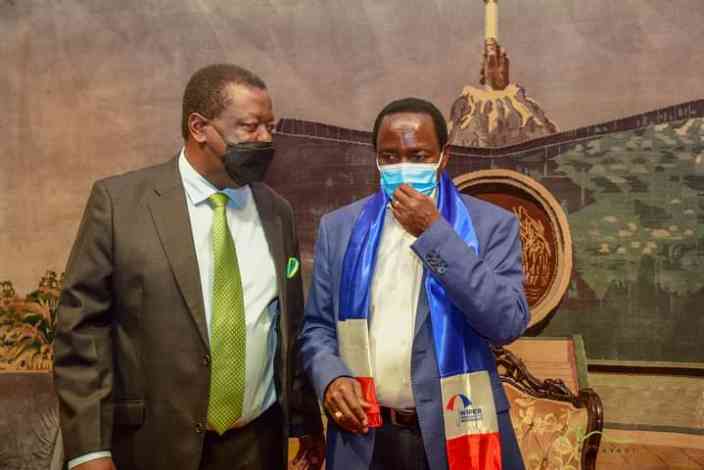 Deputy President William Ruto offered the One Kenya Alliance (OKA) to join his team ahead of the 2022 elections, but the OKA declined.

Ruto urged Musalia Mudavadi (ANC) and Moses Wetang'ula (Ford Kenya) to join his camp to boost their chances of winning the 2022 General Election while speaking at a rally in Kakamega on Wednesday.

However, OKA leaders Musalia Mudavadi, Moses Wetang'ula, Kalonzo Musyoka (Wiper), and Gideon Moi (KANU) allayed fears of a potential breakup in a press conference yesterday, reiterating their resolve to field a presidential candidate in the 2022 elections.

Bungoma Senator Moses Wetang'ula told mourners at the memorial service for Mudavadi's step-mother Rosabella Jerono at Friends Church (Quakers) Ngong' Road that they had committed to stay together to the end.

Wetang'ula claimed that one of them will be picked as the group's presidential flag-bearer, carrying the group's mantle, interests, and vision.

"All across the place, bells are clanging. Some are ringing good bells, while others are ringing hazardous bells, but in this country, we want to ring the bells of hope.

"After the elections, we want Kenya to stay together and focused, not distracted," Wetangula said.

While Gideon Moi and Musalia Mudavadi stayed away from politics, Wiper leader Kalonzo Musyoka rebuffed suggestions that he would join other political parties, claiming that OKA is the greatest party to create the next government.

"We're OKA together, and this is the best team that can hold this country together," Kalonzo remarked.