President Kenyatta: Kenyans Were Denied Their Right to Change the Constitution 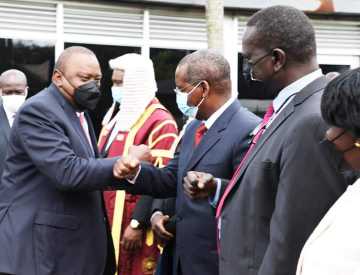 Speaking at the parliament building during the eighth national address on Tuesday, the President said Kenyans spoke with one voice about the constitutional amendment.

"We went to individuals, and 5,000,000 Kenyans consented to the method involved with making the principal revision to the 2010 constitution. The principal correction was submitted to the province assemblies, with full help. "In parliament, the Kenyan delegates, upheld the change by more than 66% said the President.

Governor Nyoro against allegations of discrimination

According to the President, Kenyans exercised their right to change the constitution through the IEBC, as well as through the county legislatures and the national assembly.

"The people of Kenya wanted a change in the constitution, but a few people sat down and decided otherwise," he lamented.

By dismissing constitutional changes, the President said Kenyans missed the opportunity to increase funding for county governments from 15 percent to 35 percent.

"If these changes were implemented, county governments would receive 562 billion shillings, instead of the 316.5 billion shillings allocated in the 2020/2021 budget," the national leader said.