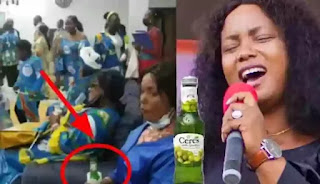 A recent video clip showing Gospel singer Christina Shusho drinking alcohol, has become very popular on social media with many believing the singer to be a cover-up.

On Big Sunday Live, Wasafi TV today on 7/11, Shusho claimed that the drink was not alcohol and is a juice that to our colleagues is given in respect of certain people and is also expensive, being in the room they appear in the clip, The bishops were still talking even though the language being spoken was not understood by Shusho and his team, so they decided to deal with their affairs by recording three video clips and sharing one while anticipating what had happened.
Another Shusho has claimed that he does not make music for money but makes live music and in it there is money.
While claiming that his main goal is for the gospel to reach the people and even the piano can make the anointing go down.