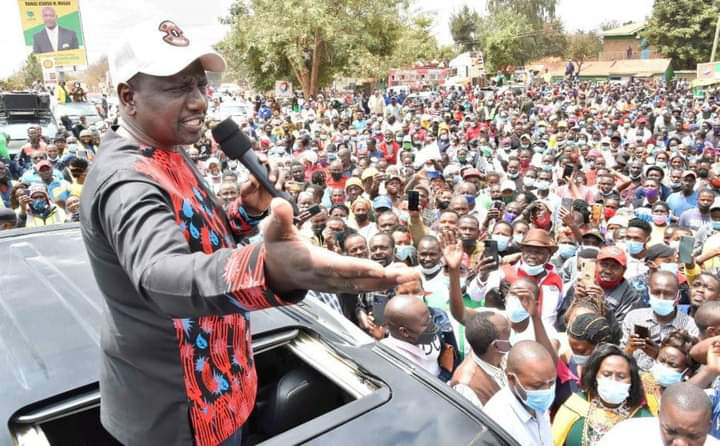 Last week, the seventh Devolution conference concluded in Makueni County in Eastern Kenya, with a number of political and other figures in attendance.
Deputy President William Ruto, whose reason for skipping the event has now been revealed, spoke out strongly during the conference, which is held every two years.
According to reports, the DP boycotted the 7th and final devolution meeting in protest at the position granted by the Council of Governors to Raila Odinga, the head of the Orange Democratic Movement (ODM).
Between November 23 and 26, 2021, the conference was place at Wote, Makueni County.
DP Ruto is alleged to have been enraged at the preferential treatment given to Raila, his now political arch-rival and main presidential challenger in 2022, and opted to boycott the meeting to voice his displeasure.
According to reports from the DP’s sympathizers, he did actually skip the meeting in order to express his displeasure with the event’s organizers.
According to reports, DP Ruto saw the conference as a campaign platform for the ODM leader, thus he couldn’t support the idea by becoming a party to it.
“No one in their right mind could expect the DP to preside over the closing ceremony of an event that was started by the opposition leader,” a Ruto-aligned MP told the Nation.
Raila arrived at the devolution conference with a large retinue of six cabinet secretaries, giving him the appearance of a man surrounded by power trappings.
Despite the fact that President Uhuru Kenyatta inaugurated the conference electronically from South Africa, where he was on official duties, with the AU special envoy providing the keynote speech, he was recognized as one of the honored guests.
When the second in command was contacted on Thursday, November 25 to close the ceremony the next day, on Friday, he allegedly assured the organizers that he would send his chief of staff Ken Osinde to represent him.
The Council of Governors, however, declined the offer and instead contacted Defence Cabinet Secretary Eugine Wamalwa, who wrapped up the three-day summit in Makueni County.