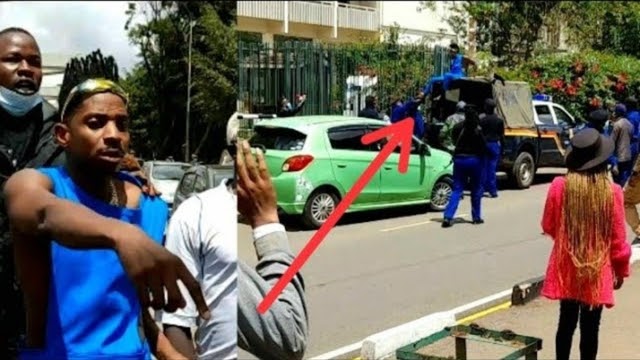 Comedian Eric Omondi is said to have been arrested by police outside the parliament building in Nairobi where he was leading a protest to defend Kenyan musicians.

His intention was to enter parliament and present his two grievances which are;

1. Broadcast stations should be forced to play music by Kenyan musicians at 75%.

2. The best local musicians should be paid the same amount of money as their international counterparts whenever they perform at concerts.

ALSO READ; Eric Omondi Directs His Anger To The Comedians

The SPM Buzz forum posted a short video on Twitter showing the comedian being arrested by police officers.

Another video on You Tube account titled “Nicholas Kioko” on You Tube shows artists and music producers marching from the parliament building to the Central police station.

One of the protesters was heard saying that Eric Omondi was inside the police station as he was in a car that was used to take him there.

Eric Omondi has been organizing the protests for some time now but prominent musicians do not seem to support him, saying he insulted them.