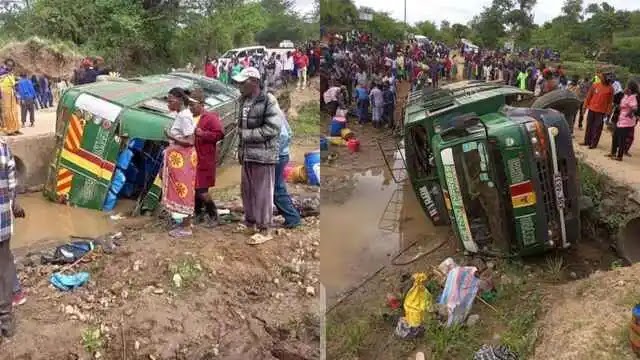 Eleven people were killed and several others injured when a minibus overturned on the Thura River bridge in Embu County.

The superintendent of the area, Isaiah Nakoru, said the 21-passenger bus was carrying 61 people when the accident happened.
Nine seriously injured people are receiving treatment at Embu Level Five Hospital while 41 others sustained minor injuries.
Speaking after visiting the scene of the tragedy, Nakoru said preliminary investigations showed that the vehicle had been alerted by the safety and transport council after it was found violating traffic rules.
He said most of the passengers on the KETNNO cooperative bus were veterans heading to Siakago to register for the nursing program.
Local ward representative Newton Kariuki, called on the national government to put up barriers on the bridge, to prevent vehicles from plunging into the river.
Following the accident, Speaker of the National Assembly Justin Muturi sent condolences to family and friends and called on the social services department to find appropriate ways to hand over the money to the elderly.