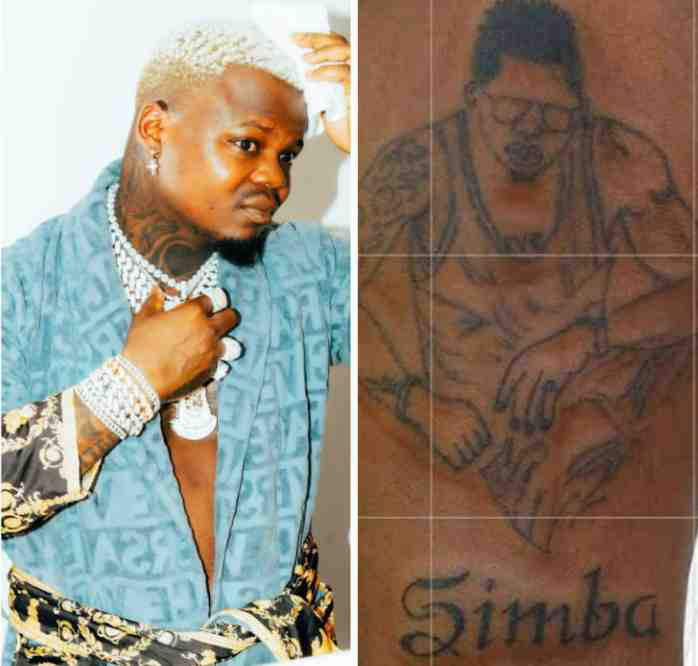 Bongo star Rajab Abdul Kahali popularly known as Harmonize has still retained the tattoo of his former boss Diamond Platinumz despite disbanding the WCB label more than two years ago after a temporary split.

Recently, a native of Mtwara who was addressing the press shortly after returning to Tanzania from the United States showed the Diamond tattoo on his left wrist.
Harmonize said despite the intense hostility between them that has manifested itself in recent years it still has great respect for its former boss in the Wasafi label.
Harmonize explains why he still has a Diamond tattoo on his arm despite their feud
“After all, I have a lot of respect for him. Today despite all the noise you hear I have a Diamond tattoo. This is his image. After all!” Harmonize said.
Konde Boy said when he was drawing the tattoo he wanted it to be a memory that Diamond lifted him from one place to another.
He said despite all that he has no intention of pursuing it but if their relationship continues to deteriorate he may decide to cancel it.
Harmonize explains why he still has a Diamond tattoo on his arm despite their feud
“When I painted this tattoo I knew he had lifted me from one place to another. We are young. I knew the day might come when we would not work together. This would be like a memory in my heart. “I’ll see someone who is ready for you to die. What will I have with him now? !!” armonize said.
Two years ago rumors that Harmonize had erased the Diamond tattoo after cutting the Wasafi spread spread online and in the media.
The owner of Konde Music Worldwide said before he left Wasafi he had tried very hard to restore a good relationship with Diamond.
He said he was saddened to see people continue to judge him harshly and see him as a traitor even though they were unaware of what pushed him away from the label that elevated his Wasafi music career.