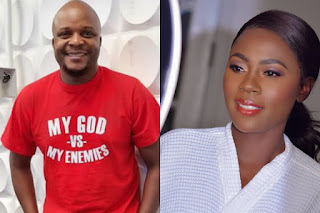 Felix Odiwuor popularly known as Jalang’oo has complained about the needs of musician Esther Akoth or if you like Akothee before agreeing to perform at the Luo Festival. Via social media, Jalang’oo has posted an Akothee poster for the festival which will be held on December 27, 2021 and said he is not happy with the artist.

He says he has paid for it but he is not happy because his needs are many and they change all the time. He has listed 15 requirements from artist Akothee which are;

1. Payment for performing one million shillings.

3. A bird that is adorned with its posters.

5. His personal preparation area to perform behind the stage

6. White couches in the area behind the platform

9. Only his doctor should have a massage parlor

15. Its duration should be between three and four o’clock at night

Jalang’oo says Akothee has taken a huge amount of money that they planned to spend on organizing the festival saying one day he will stop that fuss.

The festival was scheduled to take place on August 28, 2021 at Carnivore Stadium in Nairobi but was canceled. Due to the large number of people expected to attend the festival and the need to adhere to the conditions to prevent the spread of the corona virus, the festival site has been changed from Carnivore Stadium to Ngong Race Course.