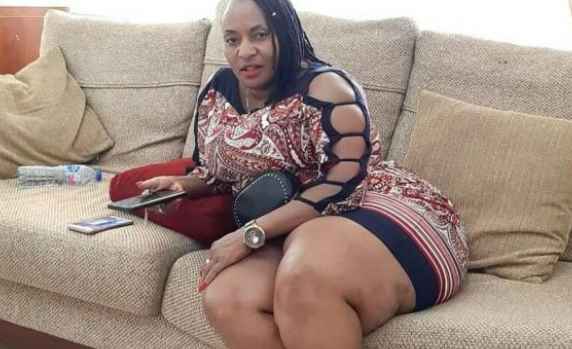 Controversial Jane Mugo, a private investigator, has spoken out about her near-death experience and attempted abduction on Thursday, November 25, when she was ambushed by unknown intruders who left her fighting for her life.

The spy queen recalled being assaulted by unknown persons at the Ainabkoi-Kapsabet crossroads while heading from Bungoma to Nairobi.

In an interview with a local TV station, the diva revealed that she was following a serious case involving murder in Busia, and that she and the Teso Directorate of Criminal Investigations (DCI) had made arrests in connection with the same case.

“I discovered that a police officer had been related to the crime throughout the case investigations,” Jane Mugo stated in the interview.

After surviving an abduction attempt, Detective Jane Mugo was left with life-threatening injuries.

After surviving an abduction attempt, Detective Jane Mugo was left with life-threatening injuries.

The investigator described how she saw two cars following her, one of which she identified as a Subaru, which sandwiched her car and forced them to halt at the site of a failed kidnapping, according to the detective.

During the terrifying episode, Mugo said that four guys armed with AK47 weapons approached their car, looted it, and then ordered her out.

One of the assailants withdrew to one of their trucks at this time to get a rudimentary weapon, which he then utilized in the brutal assault on the spy queen.

“I received these injuries attempting to defend myself from the assaults,” she said during the interview, exhibiting her scars. “I sustained three fractures on my arms, fracturing two fingers.”

The perpetrators then fled with Mugo’s driver, Kevin Okoth, and a passenger named Newton Manyana, as well as Mugo’s car, a Toyota Prado, leaving a battered Mugo for dead on the side of the road.

The spy queen battled to get to the road, where she was saved by a kind stranger. Later, the stranger drove her to the Burnt Forest County Hospital, where she was treated before being moved to the Reale Hospital in Eldoret Town for additional care.

The car was eventually found abandoned in Mumias, while the driver and other occupants were discovered in Baringo County.

Days after the event that left the private detective frightened, police have failed to make any arrests, despite the spy queen’s claim that the assault had something to do with her political aspirations, since she has expressed interest in the Kirinyaga Woman Representative seat in the upcoming 2022 elections.