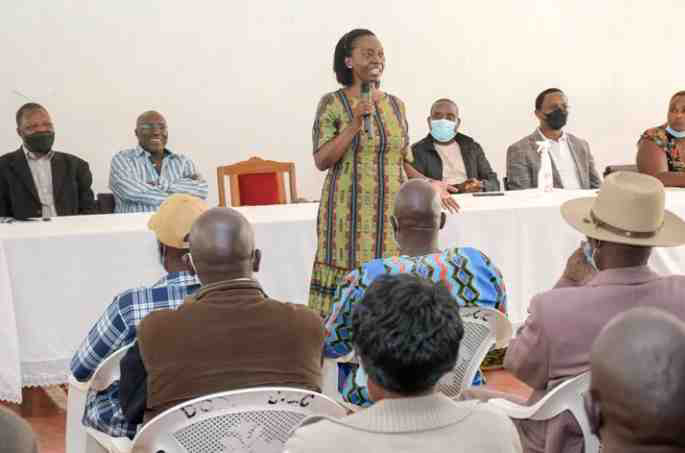 As the nation prepares for general elections in 2022, politicians have been promoting various political party systems, with some proposing to form one main political party and others opposing the idea.

Deputy president Dr. William Ruto has hit the headlines in the country, pushing for smaller political parties to be disbanded and forming one political party, while urging UDA affiliates to break away from ignorance and the United Democratic Alliance UDA. Ruto blames minor political parties for inciting ethnicity in the country
However, NARC-Kenya party leader Martha Karua appears to be opposed to the deputy president’s idea, urging Meru County residents to embrace multi-party politics.
Narc-Kenya leader Martha Karua at a meeting with Meru residents.
Speaking in the county, which is famous for growing myrrh, where he organized a meeting with residents, Karua, who has announced his intention to run for governor of Kirinyaga, urged residents not to be forced to join one party and ignore other parties.
A former member of the national unity and solidarity commission, Gitile Naituli, who hosted Karua at a meeting with local leaders, added that the country adheres to a multi-party system and anyone who persuades Kenyans to join a single political party he has not read the constitution and is returning this country to the dictatorship of one political party.