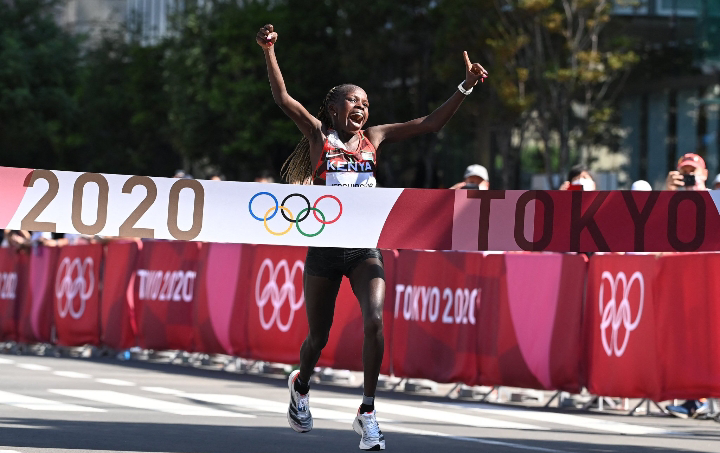 Olympic champion Peres Jepchirchir will take to the streets of New York City, early Sunday, November 7, to participate in the 50th edition of the race, aiming to become the first athlete to win the Olympics and the New York marathon.

Jepchirchir will be taking part in Sunday’s race, 8 weeks after winning the Olympics in Sapporo Japan.
ALSO READ: Kenya Athletics is changing the seminary system to reach more athletes
Other Kenyans competing in the race are Nancy Kiprop and Viola Lagat running for the first time and will face opposition from Ruti Aga of Ethiopia who boasts a prime time of 2 hours 18 minutes and 34 seconds.
Namibia’s Helalia Johannes who registered a 2 minute time 19 minutes and 52 seconds and Ababel Yeshaneh from Ethiopia will also provide the necessary resistance.
Jepchirchir has 25 points and needs a victory to reach world record holder Brigid Kosgei and Joycilene Jepkosgei leading the world standings of the main marathon with 50 points each.
Kosgei won the 2019 Chicago marathon, before winning the London marathon last year.
Joycilene Jepkosgei won the Newyork city marathon in 2019 before winning the London marathon this year.
ALSO READ: Valentine Kipketer and Elisha Kiprop win 2 million shillings after winning Standard Chartered Nairobi Marathon
In the women’s race half-world marathon record holder Kibiwott Kandie, who is running the marathon for the first time, will lead Kenyans to victory.
Kandie, who boasts a world-class half-marathon record in 58 minutes, will be teaming up with fellow Kenyan Augustine Choge who will also be running the marathon for the first time with Albert Korir boasting an excellent time of 2 hours 8 minutes and 3 seconds.
The 27-year-old Korir is proud to be among the top three in all 10 marathon races he has competed in, taking second place in the 2019 New York City marathon behind Geofrey Kamworor.
However, Kenyans will face stiff opposition from Ethiopian hero Kenenisa Bekele who will be running the marathon in the United States for the last time.
The 39-year-old Bekele is the second fastest runner in the marathon recording 2 hours 1 minute and 41 seconds.
Jackpot, after Olympic champion Eliud Kipchoge won four consecutive years.
London marathon champion Sesay Lama leads the standings with 34 points and if Bekele wins on Sunday he will equalize those points.
The jackpot of the 6 major marathon races each year is accompanied by a cash prize of 55 million Kenyan shillings.
The race is back on track this year after being organized via the internet last year.
ALSO READ: Kipchoge leads more than 3,000 people to race in Paris, 1000 days before the Olympics
The race will be the last in a series of world marathon races this year, with women running at 9:30 pm and men running at 5pm.