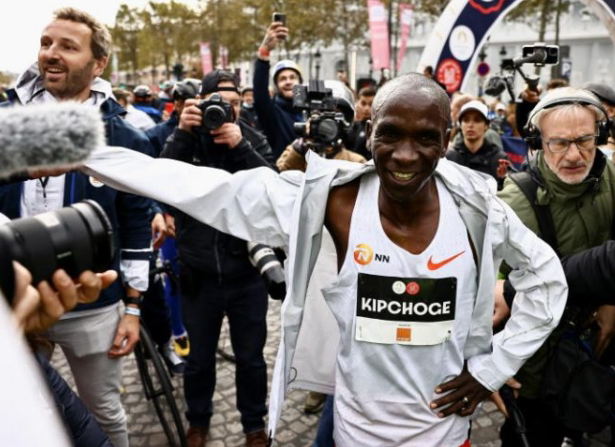 More than 1,000 participants took to the streets of the French capital Paris to take part in a mass race known as the mass race to mark 1000 days before the official launch of the 33rd edition of the Olympic Games.

Two-time Olympic marathon champion Eliud Kipchoge was among those participants who were delighted to finish ahead of him despite being the world record holder in the marathon.
The competition featured about 3,600 people who came out to compete with Kipchoge.
ALSO READ: Kipchoge attends Psg match against Lille extension Parc De Princesss
The event was also to launch the “Marathon Pour Tous”, which will involve the public in 2024 using the Olympic marathon course that year.
Only 1000 participants managed to complete the competition and finish ahead of Kipchoge.
“This is my first time I’m happy to lose,” said Kipchoge, who holds the world record for 2 hours 1 minute and 39 seconds.
“My defeat today is a victory for the hundreds of people I intend to meet in Paris in 2024,” added Kipchoge