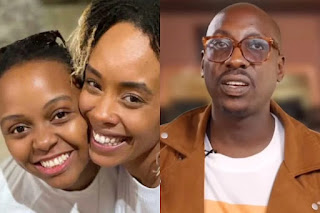 Chiki Kuruka who is the wife of the Bien musician of the band Sauti Sol has cited the allegations as the reason for the separation of Michelle Ntalami and Makena Njeri.

Via Instagram, Chiki has dismissed allegations of having an affair with either Michelle or Makena while stating that he has never had an affair with a fellow woman.
Chiki was responding to a fan who wanted to know why he asked his reasons for separating the two lovers.
“Why did you separate Michelle and Makena” An Instagram user asked.
Chiki said although he supports and respects same-sex relationships, he himself has never been involved in such relationships.
I would normally ignore this. But I think I have time right now. Let’s do this to tag the people you are talking about because as far as I know @ michelle.ntalami has never mentioned my name in her messages. I have never been in a relationship with a woman. Instead I have always given my support to a community that I love and respect very much. But these insistents are starting to irritate me, not because my in-laws should answer this, but because people like YOU forbid partners to speak. I always had nothing but respect for Michelle in fact. But since I am involved in I am responsible for something that is not related to me you need to be stopped. If you really care, I introduced Michelle, don’t think, ask your man if he was talking about me. Then leave my page “Chiki replied to the fan.
Michelle Ntalami also raised the issue, stating that she was not referring to Chiki in her letter.
“Thank you for tagging me on this @chikikuruka! I want to keep Chiki’s name from the two people I mentioned in my open letter. She’s not one of them. ‘them’ and me. Ultimately, the decision to be faithful will always come from two people in a relationship. Keep your light on @chikikuruka! Michelle said.