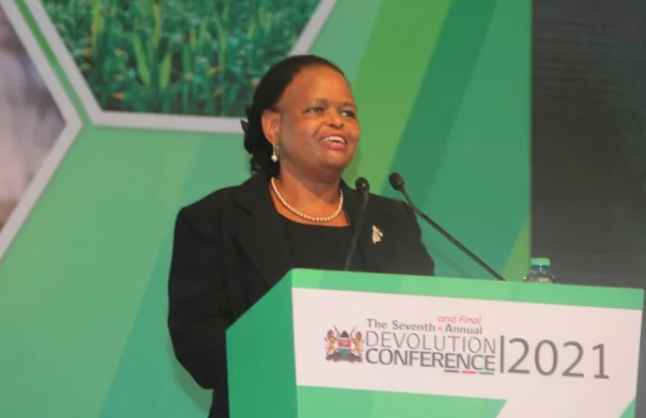 A day after the United Democratic Alliance (UDA) demanded that Chief Justice Martha Koome resign from the national electoral committee, the chief justice ignored the call, saying that the judiciary commission’s law gave her the power to involve government agencies. , and his participation in next year’s general elections is in full compliance with the law.

The chief justice made the remarks while speaking on Thursday at the seventh devolution conference held in Makueni County.

The UDA party, through its secretary general Veronica Maina, complained that the presence of the Chief Justice in the various election committees was likely to be a conflict of interest as the prime minister should be the arbiter of election disputes.

On Wednesday in a public rally in Nandi and Uasin Gishu, Deputy President William Ruto’s opponents vehemently denied the presence of the chief justice, calling the move illegal and likely to undermine the independence of the judiciary.

However, in what appeared to be a support for the Chief Justice on the committee, COTU general secretary Francis Atwoli and Homa Bay County MP Gladys Wanga stated the Chief Justice’s role in preparing for the election. it is important, in ensuring that elections are conducted in a calm manner.

The UDA secretary general, Veronica Maina, wrote a letter to the electoral commission and copied the letter to various organizations including the African Union complaining about the presence of Martha Koome on the committee.