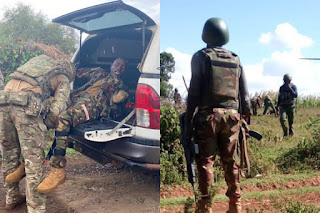 Two KDF soldiers and two GSU (JESHIU) officers were killed on Wednesday in a shooting by armed militants in the Kamwenje area, Laikipia West in the ongoing unrest in the area.

Administration officials said eight others, including seven soldiers, were injured in the ambush at Laikipia Nature Conservancy.

This brings the total number of KDF officers shot to four by Friday Wednesday.

The KDF officials were reportedly digging a ditch around the reserve when they were killed by pirates.

The killings led to the intensification of further operations in the area to hunt down the perpetrators of the attack.

More than 20 security officers have been killed by pirates stealing livestock in the area in the past several months.

Meanwhile, police from the anti-drug unit are arresting three suspects after they were found smuggling a kilogram of heroin worth three million shillings.

Police say the suspects were conducting their activities across the country and elsewhere while pretending to run a legitimate business.

One of the suspects, identified as Swalehe Yusuf Ahmed, is well-known for drug trafficking in the coastal region, having already faced two charges and has been out on bail.

He is involved in the smuggling of 105 kilograms of heroin valued at 285 million shillings.