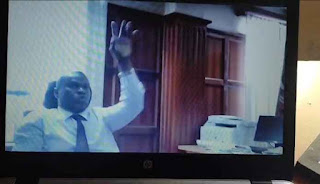 High Court Judge Juma Chitembwe has by and by humiliated Kenya’s Judiciary after he was gotten on camera getting a large number of shillings in type of pay-offs to control cases.

In an uncover delivered by previous Nairobi Governor, Mike Sonko, on Tuesday evening, Justice Chitembwe was seen getting a sack brimming with cash from a female attorney.

Following the uncover, Law Society of Kenya (LSK) President, Nelson Havi, asked Chief Justice Martha Koome to act quickly and secure the Judge since he should be anyplace close to the Judiciary.

Havi further asked the Judicial Service Commission (JSC) to start the course of evacuation of Chitembwe on the grounds that he is a shame to the Judiciary in general.

“I have inspected the confession by Mike Sonko.”

“The Judiciary removed him from office through deception and still up in the air to go down with it if JSC doesn’t act.”

“JSC should start the course of expulsion of the Judge all alone, right away. It is so requested.” Havi said.